Revoking A Will In Texas

There are two ways to revoke a will in Texas: by subsequent testamentary instrument or by physical act. The Texas Estates Code, §253.002, specifies these two exclusive ways that a will can be revoked. Section 253.002 says: 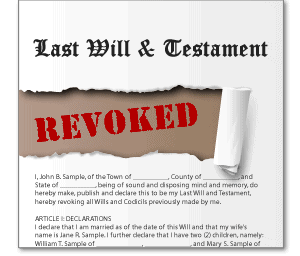 “A written will, or a clause or devise in a written will, may not be revoked, except by a subsequent will, codicil, or declaration in writing that is executed with like formalities, or by the testator destroying or canceling the same, or causing it to be destroyed or canceled in the testator’s presence.”

Subsequent Testamentary Instrument: To revoke a will in Texas by subsequent testamentary instrument, the testator must have testamentary capacity. If he does not have testamentary capacity, the attempted revocation by a subsequent will is ineffective. If the subsequent will is not admitted to probate for some reason, i. e., the will was denied probate because it was the result of undue influence for example, it is void in toto, every provision of it, and it cannot serve to revoke a former will. 761 S.W.2d 448. But, see the doctrine of Dependent Relative Revocation. The testamentary instrument used to revoke a will, does not have to be a will itself. As long as it is in writing and executed with the same formalities of a will, a paper saying as little as “I revoke my will” is sufficient to revoke a prior will.

Since revocation by implication is not favored, if the testator has a will and then executes a subsequent will that does not specifically say he is revoking the first will, the two wills will be read together as much as possible and the second testamentary instrument will be treated as a codicil to the first will.

The physical destruction must be of the entire will. A testator cannot destroy a sentence or a paragraph in a will such as scratching through them. The strikeout will be ignored by the courts.

There are some statutes that revoke portions of the will without any action by the testator. For instance, if a testator makes a will and then later divorces his spouse who was named in the will, all provisions in his will in favor of the divorced spouse are void. Likewise, if the testator executes a will and then later has a child who is not mentioned in the will or otherwise provided for, the law will allow the child to take a portion of the testator’s estate. The child is a pretermitted child.

Giving the estate to others: If a new will does not mention revoking prior wills but gives the entire estate to someone else, the new will impliedly revokes the prior will. 01-15-00855-CV.